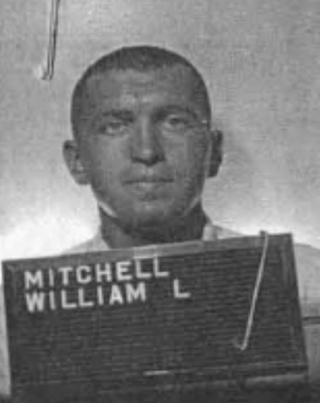 Who was Lt. William L. Mitchell ? And what was he doing on the Chesapeake & Ohio towpath on the morning of Mary Pinchot Meyer's murder ?


“No one…ever questioned who Lt. William L. Mitchell actually was, or what he was doing on the morning of October 12, 1964. Instead, everyone – the police, the media, the entire city – took Mitchell at his word – yet no one has ever corroborated Mitchell’s presence on the towpath the day of Mary Meyer’s murder. Truthfully, there is no certainty Mitchell was actually there that day, because his entire story is unsupported by anyone other than himself.” – Chapter 16: Finale.

The just released third edition of Mary’s Mosaic includes a new final chapter that focuses on Lt. William L. Mitchell’s presence on the Chesapeake & Ohio towpath on the morning of Mary Pinchot Meyer's murder. Was Mitchell, as he stated in his 1965 trial testimony and again in his January 2014 deposition, just taking his usual lunchtime run when he supposedly became, according to prosecutor Alfred Hantman, “the last person to see Mary Meyer alive,” minutes before her brutal murder by an unknown assassin? And was he merely being a ‘Good Samaritan’ when he went to police the following morning to report that he had seen Meyer being followed by a “Negro male” wearing clothes nearly identical to those of the accused Ray Crump, Jr.?

During Mitchell’s 2014 deposition, it became clear that he and his attorney were attempting to use the proceeding to create a record – under oath and during Mitchell’s lifetime – which they hoped would clear him of any involvement in the Meyer murder. But rather than establishing a lack of complicity, Mitchell’s responses revealed an ongoing attempt to obfuscate and misrepresent certain details about his military service career and training. He repeatedly denied he had any link to the world of intelligence. “No. Never. I never went into any kind of intelligence,” Mitchell testified.

Following the deposition, author Peter Janney engaged the U.S. Army, the National Personnel Records Center (NPRC) in St. Louis, and the Defense Finance Accounting Services (DFAS) in a two-year grueling battle to release Mitchell’s military service records and his ‘201 Personnel File,’ as permitted by the Freedom of Information Act (FOIA). Many of these records (posted on the left hand column of this page) clearly documented Mitchell’s intelligence affiliations and thus contradicted his 2014 deposition testimony. In January 2016, Mitchell was asked to respond to twenty questions concerning discrepancies in his deposition testimony as well as new information revealed in government documents. Through his attorney, he declined to respond.

After reviewing the material pertaining to Lt. William L. Mitchell for more than eight years, Peabody Award-winning journalist and author (who is also a premiere military and intelligence researcher) Lt. Col. Roger Charles (Ret.) characterized Mitchell’s military record as “a nightmare of discrepancy.” Given the precision of the Army’s system of accountability and the multiple contradictions and inconsistencies in Mitchell’s military service record, Charles concluded:

“The Army personnel accountability system has completely failed in Mitchell’s case. I no longer have any doubt now that Mitchell was working in some capacity for the CIA. If he had just been a straight MI [military intelligence] guy, none of this record confusion would have taken place. The only explanation that makes any sense at all was that Mitchell was so exotic, so extraordinary, that they could just not make him fit, because he really wasn’t just an Army officer. And the fact that they tried to make it fit, and succeeded for more than fifty years, I give them credit for that – but at the end of the day, when you get all the paper together that our bureaucracies generate, the people who were trying to cover this up couldn’t get it all under control.” – Chapter 16: Finale.

[All documents mentioned in the new chapter Finale may be viewed in the left hand column of this page. Refer to the file labeled Document Reference for such documents as Mitchell's Oath of Office; Locator Card; Dental Visits; Academic Report; and his 1965 Trial Testimony].